Short introduction Board for Israel

The work of the Board for Israel of the Gereformeerde Gemeenten (Netherlands Reformed Congregations) started some 25 years ago. As a result of the report of a research committee of the General Synod of 1992, the department Israel was established as part of the Mission Board of the Gereformeerde Gemeenten in 1993. After several years, it became clear that the work in Israel was too complex to be able to function well under the Mission Board. Therefore, an independent Board for Israel was established at the General Synod meeting of September 1995.

Much has happened during the almost three decades that are behind us. It is remarkable how fast the work for Israel was taken up among us. During the Synod meeting of 2006, the president, Rev. J.J. van Eckeveld, said that the work for Israel has received a firm place in the congregations, and that the theology of substitution is over.  The broad support is also clear from the collections, which are held in almost all the congregations. The annual Conference Day and Israel Day are attended by an increasing number of people. Undoubtedly, the fact that the work for Israel has a clear Biblical basis, as well as the fact that it has been wholeheartedly recommended by respected representatives of the Dutch Second or Further Reformation, have played a crucial role in this.

Much has also been done in the performance of the work. In 1998, the first general secretary was appointed. He was succeeded by Mr. J.J. de Jong at the beginning of 2000.  In 2004 a representative was appointed as a worker for Israel; Rev M.L. Dekker works in Nazareth Illit (Now Nof Hagalit). From 2005 to 2010 Mr. Iz. van Rijssel worked for the Board in Ukraine.  Four persons are working at the office in Woerden, some of them parttime.

In Israel there is cooperation with a group of Reformed-minded preachers. Besides that, there are also several diaconal projects. In Ukraine, we work with e-learning to instruct preachers and office-bearers in the reformed doctrines. We also provide diaconal support by, for example, supporting the soup kitchens of the Jewish-Christian church Beit Emed in Zhytomir.  For both areas we can say that there are many open doors to spread the Gospel of free grace. We should be thankful for that as well.

Spreading lecture is an important part of the board’s activities. Thousands of Bibles and good Reformed books in the Russian and Hebrew languages were spread over the past years. Several translation projects, such as the translation of Matthew Henry’s Commentary on the Gospel of John and the Psalms have been finished already.
Recently new ways to spread good literature were opened. The website bibleandbooksministry.com provides more than 300 books  -most of them for free – in nine languages in e reader or PDF format. And the number of books on the website is ever increasing.

Finally, we ask people at home to remember our work. This can be done by means of, for instance, the Israëlbode which is published five times per year and is available in English (Israel magazine). We also organize information meetings in congregations and at schools. Encouraging love for Israel and opposing anti-Semitism are important parts of the board’s responsibility. An interesting website has been made for educational purposes: www.onderwijsenisrael.nl.  In summary, we may conclude that the work has received a place in congregations, and that the work among the Jewish people continues to grow. We would like to tell you more about our work in congregations, at youth groups, and at schools. We use up-to-date PowerPoint presentations for this purpose. For requests, please send an email to info@boardforisrael.nl. 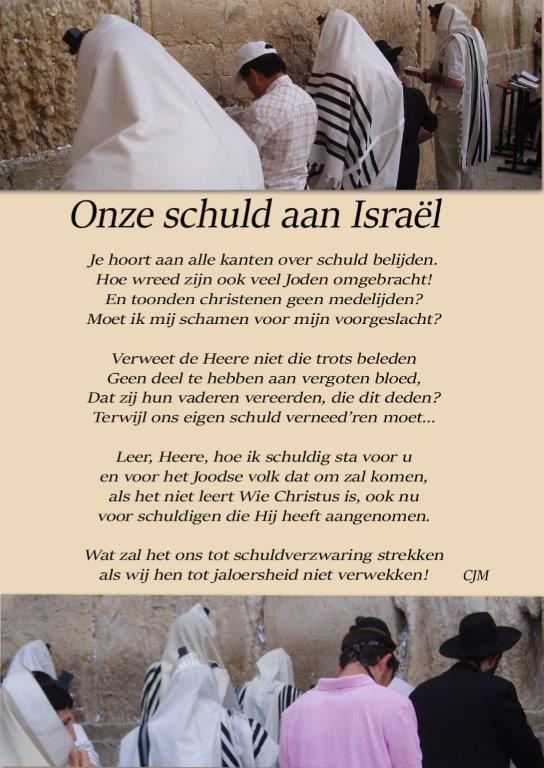